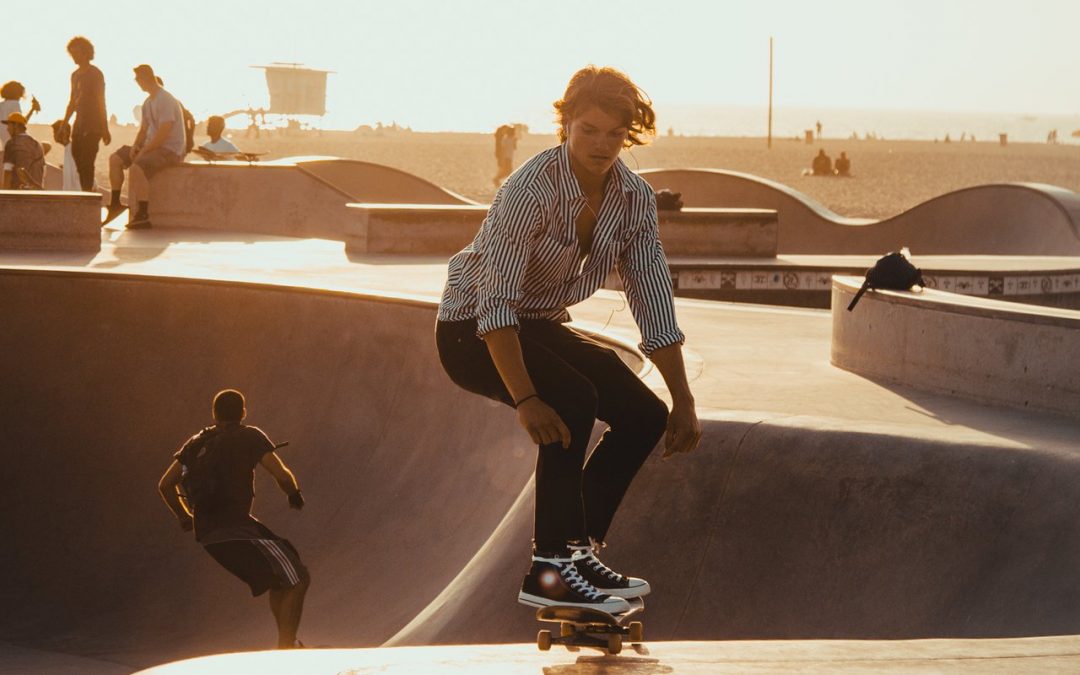 Skateboarding has become a popular commodity over the last decade with more and more kids wanting to skate. For some parents, it’s an easy decision to enter the buyers market, but for others not so much, and that’s okay! I want to focus on coordination here – both mental and physical.

Allow me to give you some perspective as a 38-year-old skateboarder that is also a parent whose child is just getting started.

Hi, I’m Steve Connerton and I started skating in what is considered skateboarding’s Golden Era – the 1990’s. The origins of the Golden Era can vary based on who you talk to because skateboarding has truly evolved and each evolution is equally important as the last.

For me, it was 1994. I was 12 years old, I was an active athlete in basketball and football and had dreams of becoming a professional athlete. All it took was one day, one person, one skateboard, and one ollie.

I had seen enough. I knew from that second I was a lifer. How one knows that at the age of 12, who knows? I just did. There was something that was purely magical about the sport. I loved playing organized sports and had tons of potential, but quit the three (yes, I said three) basketball teams that I was on at the time to pursue skateboarding.

Trust me, this didn’t go over well, but I committed anyway.

Skateboarding, then and now, has been a true escape for me. All my worry, fear, anxiety, depression, whatever I felt as a vulnerable teenager dissolved away.

I was happy when life gave me a lot of reasons not to be. I was having fun putting in the work, rather than running sprints and listening to coach. It was a refreshing change that I needed at the time.

I was my own boss and I wanted to be the star, we all did. And, to be honest, a few of us did become known on a skateboard and I couldn’t be happier.

Warp to 2020 and here I am, still daydreaming about skateboarding as I did in 6th grade.

These are my Top 10 Reasons to Start Skateboarding.

Well, I am pushing 40 and still skate sparingly, so when I do, I get sore. The soreness is much more upper body than you might think. The upper body is used heavily as well, specifically the shoulders and core. So you can always count on a great workout.

Not to mention, your reflexes, muscle memory, and pain tolerance will become optimized.

I won’t be the first one to say this, but when you skateboard, you meet people, lots of people. People from all walks of life, people you love and people you don’t like will be part of your everyday life.

No matter the circumstance, we do it for the board. When you have something you love so much that you can’t let go of, dealing with a few people you don’t like is trivial. On the flip side, the feeling may be mutual.

Needless to say, and over the many years of skateboarding, I’ve been taught to see the best in people, and that has spoken volumes about who I was and who I am now as a person. I thank skateboarding for that.

I will keep this one simple. Skateboarders skate, that’s what we do. Skateboarding doesn’t judge based on any race, religion, creed, nationality, sexual preference, or anything else that I might have missed.

I am a firm believer that skate culture is a true trendsetter that traditional American culture can learn from.

One thing that I have noticed over the years is the connection between skateboarders and creativity. In itself, skateboarding is an outlet of creativity that some refer to as an art form. I see a lot of this creativity within the skate community and culture, which gravitates towards art, music, fashion, and individualism.

In my own experience, when I have creative blocks (as a web designer), simply getting on my board for a ride can clear some of those creative blockages. Pretty cool, right?

If there is one thing that I have become over the years, it’s patient. I attribute this to skateboarding. The great thing about skateboarding is it usually translates to understanding that to fully develop in any area, you have to be patient. And on top of that, get used to failing.

Let’s remember, all skateboarders fail more than they succeed. The battle to better yourself will be neverending, and that’s not too shabby of a work ethic to have.

Not only does it contribute to building patience, it also contributes to teaching us to embrace failure instead of running from it. As skateboarders, we understand that every time we take a push we also create an additional push that pushes the limits of our abilities as a skateboarder.

You will learn if you have a little skater of your own that it isn’t so much the tricks that they can land, but the tricks that haven’t learned yet that keep them on the board.

It’s hard to deny that this approach, an approach that promotes failing endlessly days on end just to land one single trick, translates beautifully when it comes to sharpening life skills and work ethic.

I know this first hand and understand just how important skateboarding has been for me professionally and personally. I know that skateboarding can have the same effect on those that take it seriously and I will continue to push that message to the youth.

Now, if this were the 90s, I would say just the opposite, but it’s not, it’s 2020. A lot has happened since my heyday and I can truly say that skateboarding really does keep kids out of trouble. How? You might be thinking.

It’s pretty simple. Back in my day, there were no skateparks that were close enough to get to, so we skated the streets. Today, you can usually find a skatepark within 10 miles depending on where you live.

Additionally, over the last few years, skateboarding has been trending towards going recreational. This will help to make skateboarding more of an accepted sport at the state level and allow for retired Pros to take on work teaching our youth.

SFK will keep you posted on the progress that is being made in PA with this as we are actively involved in the advent of recreational skateboarding in the state.

Maybe it’s the science nerd in me, but man do I have a better understanding and respect for Physics. It wasn’t until Rodney Mullen’s TED Talk that I really latched onto this concept.

If you’re not a skater or don’t know anyone that is, you are probably unaware that almost all modern-day street and freestyle skateboarding tricks were created by one man, Rodney Mullen.

A man that I consider a genius and that the skating public at large considers to be the “Godfather of Skateboarding”, Rodney has created so many tricks that it’s just easier to list them:

I am right there with you and happy to say that if you or your child is looking to skate, whether you know it or not, there will be a ton of Physics swirling around constantly thanks to The Godfather.

Most skateboarders, especially the older ones, will be very quick to tell you that skateboarding is one of the most therapeutic activities in their lives. I agree with this sentiment, have felt the same way even at a young age, and agree with that logic even more as an adult.

It can clear and free the mind more than any activity that I can think of. I come out of a skate session feeling better than when I went in.

For me, it’s the only activity where I can, even if it’s for the milliseconds that it takes to ollie, just have zero thought, and just be free. The more tricks I attempt, even if they are failed attempts, the freer I feel. However, I will leave you to be the judge once you or your child get on a board for yourself.

Barring soaking rain, high winds, or a blizzard, you most likely can get out and skate. We often refer to it as having the itch, the itch to get out on our boards. The great part is, we can. Some of the hardest days of my life were followed by me just going out on my board by myself.

Sometimes I would go to the local playground near my house in Philadelphia, or I’d just skate to ride. Riding is one of the most underlooked facets of skateboarding.

I can’t explain a better feeling than finding a slight hill on a sunny fall day that allows me to hop on my board and roll at just the perfect speed until you eventually stop due to gravity’s graces. It’s a feeling of being invincible as the air brushes against your face as you take in nature’s beauty of the concrete jungle that only you and your fellow skaters define as a masterpiece.

Up to this point, I have mentioned a lot of reasons why skateboarders are among some of the most creative, self-disciplined, and motivated individuals. I have seen a lot in my day in the form of what skateboarding can do for anyone that wants to give it a shot.

From my perspective, skateboarding has taught me to keep childlike energy throughout life and to never take anything too seriously. It has also taught me that anything you can think up is worth waiting and being patient for.

Skateboarding to me is more than a sport, it’s a lifestyle. A lifestyle that I am proud to lead.

Revolutionary Trick Tutor for Beginners ONLY $79.99!